In the last 3 months the Genesis website shows Turangi  recorded as having only 199.6 mm of rain (roughly 8 inches) which is a very dry spell. The rain has fallen in 4 events of uneven size. The river-flow graph shows the largest flow of 130 m3/sec  back in February with 1 other event making 42 m3/sec and others barely 30m3/sec. Anglers know that trout have a built in barometer and read when the river level will rise and start to run up river with the rising barometer. Many an angler has enjoyed great fishing before the rain as a result and many others welcome the experience as the water levels return to normal.

Despite the running of fish I have had the opportunity to obseve a large school of trout waiting in the river for change pressure to occur before they move on. On one occassion I walked downstream on the left bank to observe and a friend took the right bank to fish. He cast his nymph into the right spot to attract the fish but the nymph was like a sheepdog running through a mob of sheep and after the passage of the nymph the fish were back in their school. I watched them for a month in the same pool before they moved up stream.

Fish have been in the river for some time but they are not much attracted to the fly. Anglers are saying that the “fishing is hard. Wait for the rain”

Fish have been caught. Not many. Among those have been very good fish as these photos of committee members will show. The fish are big – in the 6lb + mark and in excellent condition, weight, great shape and strong colour.  One is 6lb the other 8lb but which is which? 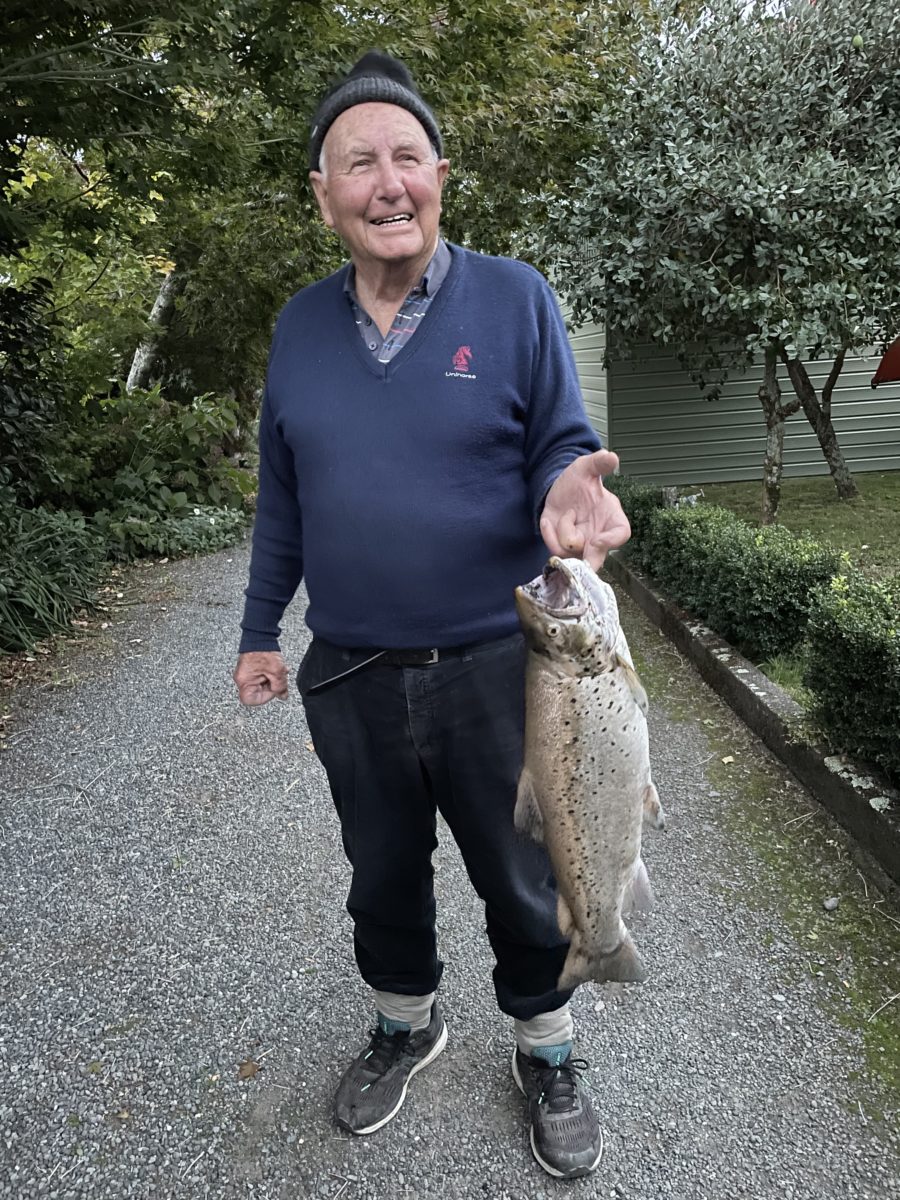 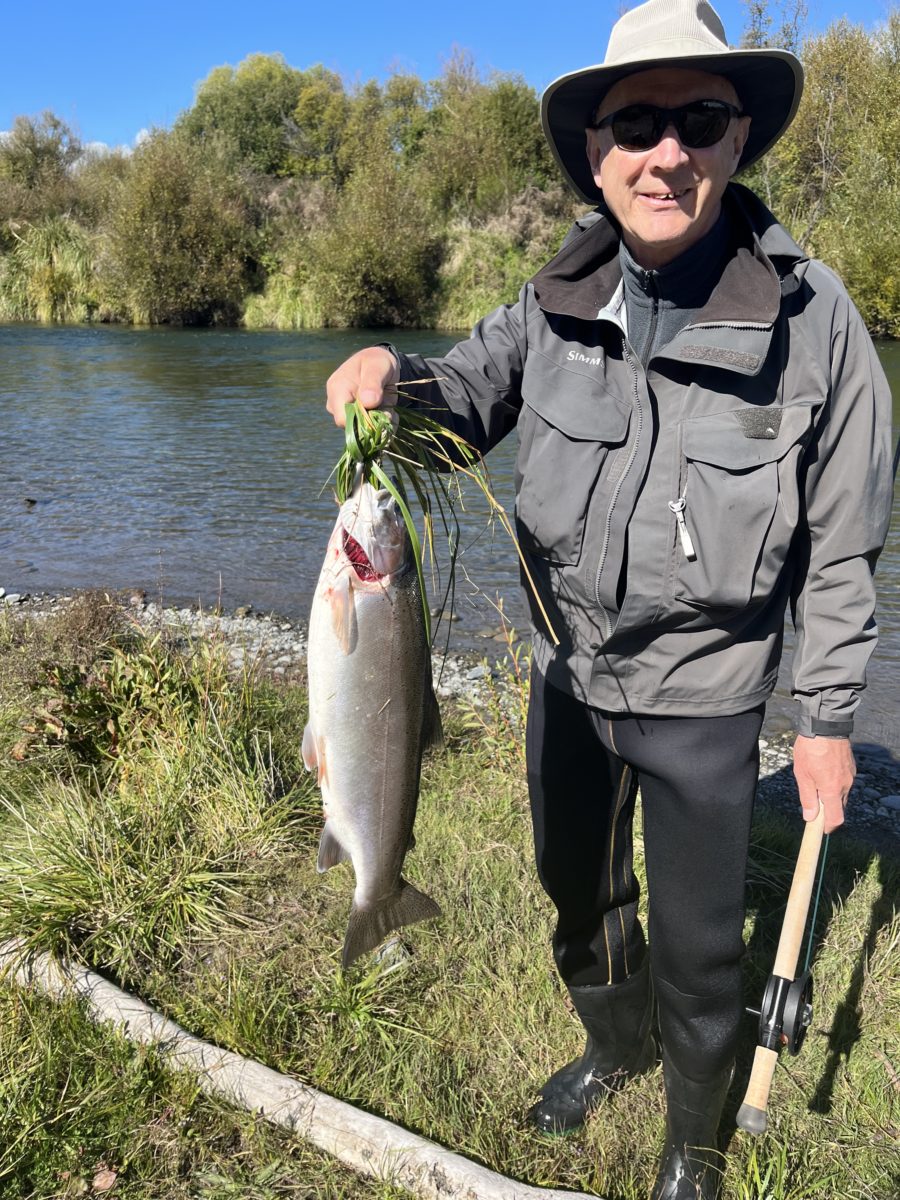 When trout run  they throw caution aside and snap at any lure that possibly looks like food, or an irritant, and that is what is being waited for.

My Turangi weather forecast predicts further rain free days until a 90% chance of rain Monday 9th May, 40% Tuesday, a lovely fine day Wednesday and rain follwing in the days after.

A reminder that our AGM will be held on Saturday 21 May. The detail from our 2021Annual Report is:

NOTICE OF ANNUAL GENERAL MEETING
The nineteenth Annual General Meeting of the Advocates for the Tongariro River Inc.
will be held at 139 Taupahi Road, Turangi, Saturday 21 May 2022 10.00am. All
welcome.
AGENDA
The business of the Annual General Meeting will be to:
• record those present and note apologies
• receive the minutes of the 18th Annual General Meeting
• receive the President’s report
• approve the financial statements
• consider motions of which due notice has been provided. The full rules of the of
the Advocates for the Tongariro River Inc. are printed in the 2004 Annual Report
and are also available on the Advocates website www.tongariroriver.org.nz
• appoint an executive committee comprising a president, vice president, a
secretary, a treasurer and 10 committee members
• consider any other matters

Photo Competition – April 2022.
Have you taken a good photo of the Taupo trout fishery? If so, why not enter our photo competition and be in to win a Taupo fishing licence.

A free fishing licence will make an ideal start to the new season, which kicks off 1 July. Winning photographs will be used to illustrate the various licence categories, which means there could be up to seven winners – improving your chances of winning!

Closing date for entries is midnight Sunday 15 May 2022.

Competition details and information on how to enter can be found below.

We are learning of the heating of Mt Ruapehu’s crater lake. At this time we are being assured that it is not likely to erupt but there could be Lahars (lake overflow to run down the mountain and join up with the streams somewhere around the mountain as happened with the Tangiwai disaster. We should remember the problems caused in the Tongariro from the vast quantity of ash that was carried into the river when such eruptions ocur.