Tangata Whenua, owners of the riverbed, and all users of the Tongariro River are stakeholders, individually or as groups or organisations. These include Anglers, Walkers, Mountain Bikers, Kayakers, Rafters, Swimmers, Artists, Photographers and other who enjoy the river for its beauty and the recreation it offers as well as the business community of Turangi and Taupo.

Ownership of the Tongariro River bed was vested in the Tuwharetoa Maori Trust Board in 1999 pursuant to the Te Ture Whenua Maori Act of 1993. The Trust Board hold title of the River Bed on behalf of members of the hapu adjoining the river, and also in trust for the common use and benefit of all the peoples of New Zealand as far upstream as the junction with Whitikau Stream.

Ngati Turangitukua are the hapu that have lands along the river from Turangi to the Delta.

The Fish and Game Council has responsibility for all NZ Freshwater fishing except for the Taupo Fishery. An important link for information on fishing in the the rest of New Zealand is NZFishing.com - The New Zealand Fly Fishing web site. Daily Information on fishing in the Tongariro River is available from tackle shops, fishing guides and motel websites among which are Sporting Life and the Tongariro River Motel sites.

An important event in the short life of the Advocates occurred on the 12 November 2003 with the inaugural meeting of the Tongariro River Management Forum. At that meeting convened by Waikato Regional Council and held in Turangi, the case for a Tongariro River Management Forum was spelled out, terms of reference were established and membership was confirmed. The Advocates have felt the need for a public forum whereby concerns about the river could be discussed, Now with special rates being levied for river restoration and sizeable mitigation funding from the hydroelectric utility available to Ngati Turangitukua, ratepayers and friends of the river sought some mechanism whereby accountability could be rendered visible. While the Management Forum is not a statutory body, it has the potential to re establish effective working relationships amongst the agencies and groups which have an interest in the river. Enhancing that relationship is a necessary step in devising an ongoing river management plan. The background to this development is the abrogation of responsibility by the Crown for the damage incurred as a result of the Tongariro Power Development scheme.

Purpose of the Forum The Forum aims to link the community to the professional oversight of the river. A river management plan needs to be prepared with inputs from all interested and affected agencies. Therein, issues will be identified and addressed and an annual work plan will be set up. The Forum will expect to assist with the consents process, and finally, provide feedback to the various interest groups. The Forum will have to address the concerns of the riverbed owners, Ngati Turangitukua, who seek restoration of their taonga, residents with flood protection needs and folk who identify who identify with the importance of the river recreationally and aesthetically. It is widely accepted that the river has not been well cared for, from 1972 to 1992 the Crown largely ignored the negative effects its engineering schemes had on the river. Since 1992 when the river bed (from the Delta to the Whitikau) was gifted back to Ngati Tuwharetoa, the owners have viewed the alarming rate of deterioration, noting that the damage is compounding from one year to the next.

Waikato Regional Council with responsibility given from central government for all environmental matters including protection of Turangi from flooding and for management of the river. A Catchment Management plan exists to satisfy the requirements of the Environment Court but stakeholders will work with Waikato Regional Council to complete a comprehensive catchment management plan. Stopbanks have been built to protect the town against a 1:100 year flood (1700 cumecs) and has an annual plan to clear willows and other vegetation that hinder flood flows.

At a Local Government level, Taupo District Council and the Turangi Tongariro Community Board are stakeholders with influence through urban and rural growth strategies.

Genesis Energy is the power company that operates the Tongariro Power Scheme generating 361.8MW of electricity from power stations at Rangipo ,Tokaanu and Mangaio.

River flow and other useful information can be found from the Genesis website:
Go to - https://www.genesisenergy.co.nz/assets/rivers-lakes-rainfall
Genesis produces an annual compliance monitoring report for the Tongariro Power Scheme which is provided to councils. Genesis currently undertakes monitoring of:

Mighty River Power manages the lake level of Lake Taupo and through this management has an effect on the ability of the Tongariro River to deposit its sediment into the Lake. A far sighted report in 1964 saw this problem and recommended that the dredge used for the Tokaanu tailrace be placed at the mouth of the Tongariro River to assist the river clear the sediments.

The Taupo Fishery Advisory Committee (TFAC) was set up as a "users advisory group" following the establishment of DOC in 1987. One of its main functions is to facilitate communication between the angling community and the fishery managers.

Overall, the 6 primary functions of TFAC, as defined by the fishery regulations are:

Richard Kemp and Julian Proctor represent The Advocates for The Tongariro River on the committee. They were appointed by Minister of Conservation, The Hon Kate Wilkinson on 12.4.2012. The Conservation Act puts management of all freshwater fisheries in the hands of Fish and Game with the exception of the Taupo fishery. 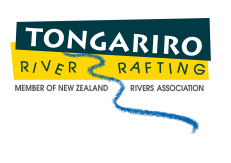 Tongariro River Rafting have been taking tourists on rafting and fishing trips down the Tongariro River for almost 30 years and in that time have got to know the river well and have become keen conservationists of the river and environment. They take pride in showing off the river and environment plus its inhabitants and to this end have established an Educational Program aimed at Schools and Groups plus a Blue Duck Project where they have taken on the responsibility of laying and maintaining predator traps on parts of the river that are only accessible by raft. They have been doing this for 10 years and now when they take people on a rafting trip down the river, Blue Ducks have increased in number from rarely being seen, to being seen on 90% of the trips.

Rafting New Zealand run rafting and fishing trips down the Tongariro River to suit all ages and levels of ability. They enjoy showing tourists the river environment and in particular, sightings of the rare Blue Duck. To this end they have formed the Awa Toa Preservation Fund, 1% of the revenue from all river trips goes to this fund to preserve and protect the river environment. Regular sightings of the Blue Duck indicate healthy water quality as they require clean fast flowing rivers and streams in forested areas to breed. The healthier the river, the more breeding pairs of Blue Duck it will support.

The Tongariro and Lake Taupo Anglers Club was formed in 1955 as a result of a merger between the Lake Taupo and District Angling Club and the Upper Waikato and Tongariro Anglers Club. TALTAC has around 500 members and initial aim was to maintain and protect conditions in the interest of anglers in the Taupo fishery. TALTAC was initially a major participant in the Taupo Fishery advisory Committee and lobbied government and ministers in an effort to mitigate the effect of the Tongariro Power Scheme which reduced the river flow by half. Today the club provides accommodation and facilities for its members in its accommodation block in Turangi.