We have had a dry first 3 months with less than 120mm. The dry was broken with 106 mm in the last 7 days. The river has risen slightly but is dirty.

I fish less these days and am grateful to receive copy to include in the Blog. Carl Bergstrom gave me the following report for inclusion.
‘There are a lot of juvenile fish in the river at present, but also some good size rainbows in excellent condition fresh from the lake. If they are any indication of what is in store for the winter runs then it should be a very good season. The cicadas have pretty much gone at the time of writing, but the lacemoth are plentiful and there is no shortage of rising fish during the day. Finding the right fly has been tricky, perhaps because the natural food is so plentiful any pretender is ignored. However, after a couple of frustrating hours trying countless different small flies to snatch a fish, just to cover the bases I tossed in the largest cicada in my box. It was taken instantly by an excellent fish which had been tormenting me all afternoon, and then another followed shortly after that. The following morning I used the same fly and had a similar result on the second cast. So sometimes “matching the hatch” is not the best strategy – perhaps a reminder of what a really good meal looks like was just too much to resist! The other successful method I found in lower light conditions was swinging a wee wet on a floating line – a very easy and relaxing way to fish too.’

The committee met on Saturday March 19 and they came 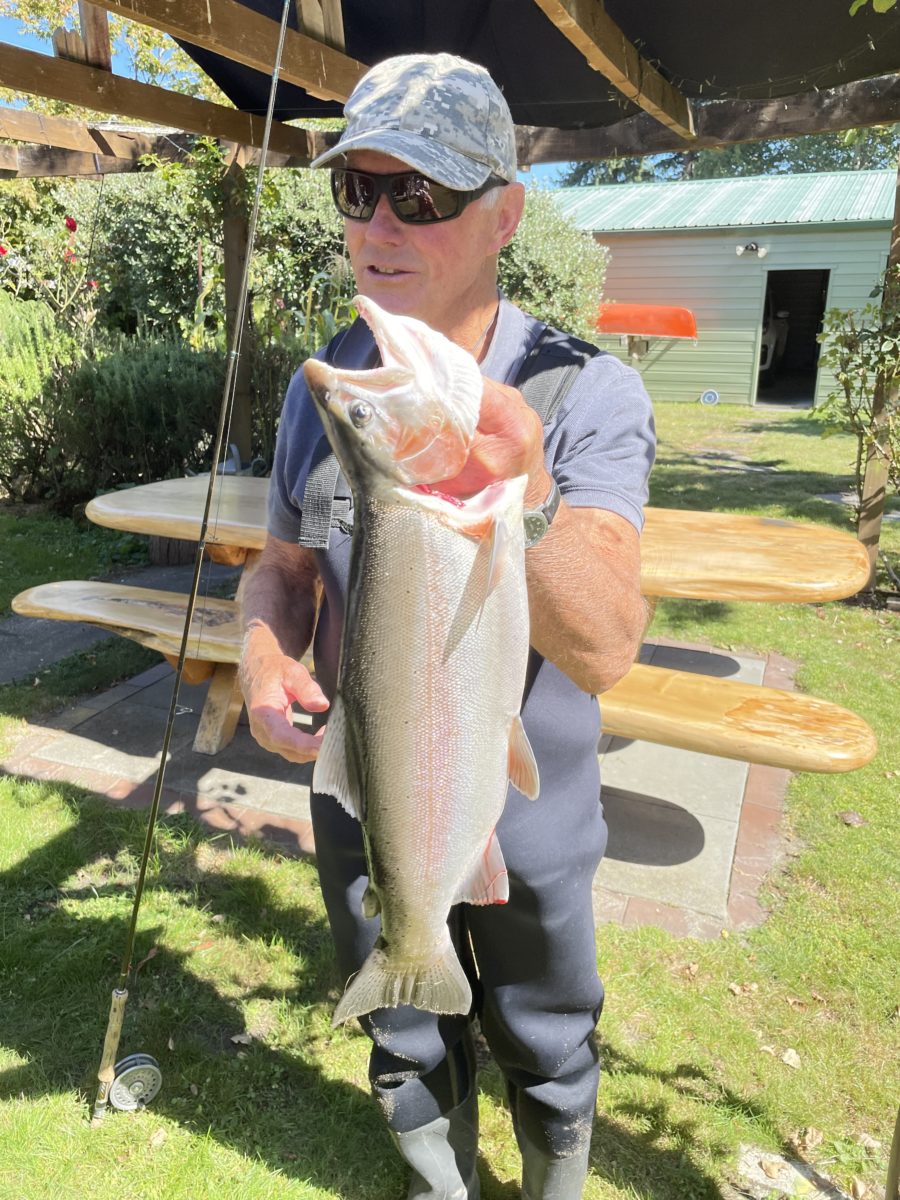 for a couple  of days before and after the meeting day. I spent a couple of hours fishing downstream with Mike Forret. We each  caught a couple of juveniles and Mike with his Skagit gear had a couple of bites from takeable fish before we called it quits there. I dropped Mike at the Bridge Pool and an hour later he called by with a couple of fish for me. He was pleased to have played a big fish for a lengthy period before the fish won the battle.

Gray Brown and Paul Brennan called in this morning to report that only Paul had managed to catch two fish and otherwise it was hard going though there were a lot of juveniles and they caught some of those. Of the two fish kept, when gutted the stomach contents indicated only green slime. Richard Kemp reported the same but this time found the fish to be excellent eating.

It is early season and a long way from the peak of the season (November) so there are still a few spent fish around.

The Taupo Fishing Advisory Committee (TFAC) met on February 24. From that meeting no change was yet decided the matter still under consideration. The TFAC committee is supportive of the changes mooted in the last blog

The NZ Fy Fishing team receives very little publicity in NZ’s main papers and I have often wondered how such a team is selected. I had a chat with the current Team Captain, Johannes Krill and asked him about the selection, competition and administration of the team. I learned the following:

The Annual Report was emailed this week. Please advise if you did not receive it.

Thank you for those who have paid a subscription. There was a glitch in which multiple attachments were received. We are most apologetic for this happening. The matter has been fixed for the future.