Despite the pandemic we had a good fishing experience (when able to fish) in 2021 and look forward to a continuation of good fishing this year.  Signs look good.

John Toogood Treasurer will send a subscription email early next week but there is a new payment option explained in this blog.

The draft regulations for Lake Otamangakau are available for comment.

Finally in this blog an invitation from Lakes and Waterways Action Group where James Renwick ias Guest speaker on Climate change for their meeting on the 17th Frebruary.

Advocates for the Tongariro River have updated their membership and donation payment facilities to allow members and supporters to pay membership fees and make donations directly online via credit card.
In addition, members can now pay their membership automatically each year with an annually recurring subscription.

To pay your membership fee and optionally make a donation

Make a donation only

On 1st February  Eric Wilson and I had a very pleasan afternoon fishing at and around the Delta. When we arrived at about 1.45pm the lake was quite choppy but after a couple of attempts we managed to anchor my boat in the middle of a quite strong rip at the main river mouth. It looked very promising and so it proved to be as Eric caught avery good five pound rainbow jack on his first cast, I then caught a hen of 4.5 lb in great condition.

The wind then died and the lake was like a mill pond. Eric caught one more (not as good as his first fish). After about an hour without catching any more we went jigging at about the 40 meter depth mark. I was very keen to try a new Pat Swift jigging rig which was recommended by jigging expert Heather Macdonald. It obviously worked as I caught two superb fish, the biggest being 6 lb.

Unfortunately this fish tangled my line into a real mess. which Eric fortunately was able to untangle. However, it was then time to return home. It was a very memorable afternoon and made us appreciate what a great fishery resource we have in Lake Taupo.

The next TFAC meeting will be held 24 February 2022. Richard Kemp is our representative on TFAC. Julian Proctor (a member of our committee but at TFAC represents TALTAC) is Chairperson. Contact with either can be made through our web contact page. Your views are important.

This will be an important meeting where decisions will be made about the future management of Lake Otamangakau. Options were presented in the last written update provided via email on the 16 November â€“ it contained a report from Michel Dedual which summarised a body of research and outlined key management options. It is worth adding, the proposals made within the report align closely with angler feedback. The report is available on our website so you can easily share it with others: Lake Otamangakau Research Update 2021>  We will also be promoting the report to the wider angling community in our upcoming newsletter.

The report is copied here.

The main objective of this study is to apply a decision making process to support possible changes to fishing regulations during extreme environmental conditions. Twenty-seven years of research and monitoring provides us with a very good understanding of trout populations at Lake Otamangakau (Lake O), but we must also consider the following elements:

To explore what type of management action could be the most effective at maintaining anglersâ€™ satisfaction levels and fish population perennity, we first used the biological aspects of trout runs collected over 20 years of trapping to build a dynamics model. We then submit this population to various degrees of fishing pressure, water temperature, changes caused by global warming and the corresponding catch-and-release mortality, into the model. The impacts of global warming were considered using 23 management regulation scenarios. We estimate these impacts on the catch rate of all fish, trophy fish and the duration of a fishing season. The outcomes of each scenario are presented in the table below. 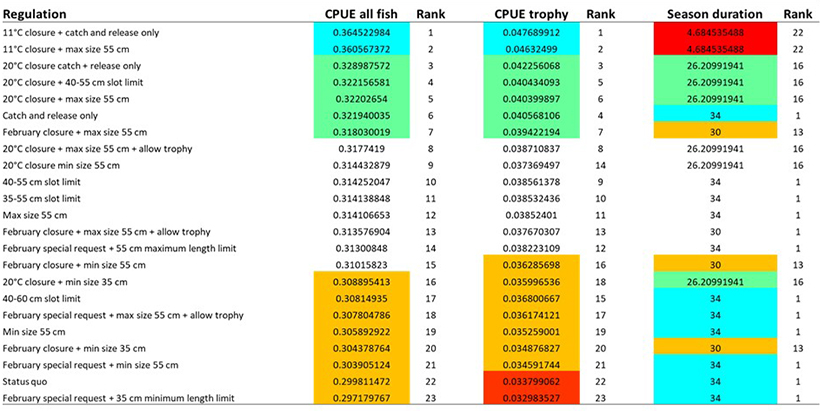 Table 1. Outcomes and impacts of various fishing regulations for Lake Otamangakau on CPUE (fish/visit) of all sizes and trophy fish (>650 mm) and implications on the duration of the fishing season. | View larger (JPEG, 200K)

The highest Catch Per Unit Effort (CPUE) would be expected with regulations allowing only catch-and-release combined with a closure of the fishery when the water temperature reaches 11 ËšC. This temperature threshold represents the condition when we observed no mortality caused by catch-and-release (commonly called â€œno killâ€). However, such a regulation would dramatically reduce the fishing season restricting it to just over a month (4.7 weeks). The lake surface water temperature remains below 11 ËšC from April to November although this period will diminish with global warming.

Some anglers may suggest extending the fishing season to include the entire duration with water <11 ËšC. I think this would add another unnecessary stress on fish migrating to spawn and during the early phase of their recovery.

Note: For clarity and conciseness, I didnâ€™t put the impact values of the increases in water temperature caused by global warming but considered scenarios with different rates of temperature increase per year. The results indicate that the rate of temperature change will negatively affect both the CPUE and the duration of the fishing season.

At the other end of the spectrum maintaining the status quo (doing nothing) or having a compulsory harvest of fish >350 mm in February would generate the lowest CPUE but would maximise the duration of the fishing season.

We believe that neither of these two options are desirable nor justified. We know that the number of fish in Lake Otamangakau has a negative impact on their average size, so aiming at no mortality (catch-and-release only and closure at 11 ËšC) could lead to an overpopulation of fish that would prevent the production of trophy fish and hence negate the benefit of a change in fishing regulation. On the other hand, not changing anything or relaxing harvest further could potentially reduce the fish population to levels where no trophy fish are available.

As we said earlier, there are several types of anglers fishing Lake O, with some who want to harvest fish for the table. We have analysed the length class distribution of the fish kept by anglers and we can see that the number of fish kept is small and that the average size is less than 550 mm indicating that anglers are not selecting trophy fish to harvest (Graph 1). 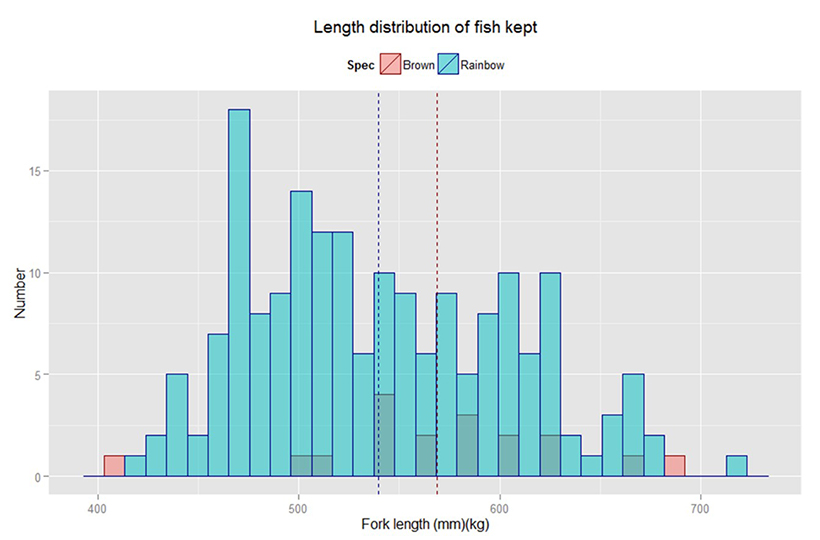 Therefore, we are confident that allowing some harvest will not have a significant detrimental effect on the availability of trophy fish and that a catch-and-release only regulation is not warranted. However, even though the surveys indicate that virtually no angler seeks to harvest the allowed daily bag, I would suggest that reducing the daily bag to 2 fish would send the right message.

In fact, the outcomes of catch-and-release only without any temperature threshold closure will have a less positive impact on CPUE than allowing some harvest of fish with some size regulation and water temperature restriction.

Setting the threshold temperature at 20 ËšC for closing the fishery would have the best outcome but it presents some logistic problems and can have an unfair impact on anglers. The temperature in the lake can change quickly from one day to the next so it would be difficult to put in place and enforce such a rule. Furthermore, it would be unfair to those anglers who plan trips to Lake O at great expense, only to arrive and be prevented from fishing because the water temperature is over the threshold.

The continuous temperature monitoring indicates that the lake surface water temperature is highest from mid-January to mid-March. So having a fixed closure period covering February would be simpler to understand and easier to enforce.

Considering all the limitations and constraints of the various scenarios, I believe that having a maximum size of 550 mm combined with a February closure constitutes the best compromise to address the anglerâ€™s satisfaction and maintaining and protecting the trout population.

Even though the differences in CPUE outcomes between the different scenarios seem very small we must remember that the total fish mortality will be multiplied by the fishing pressure. The Lake O fishery is open access; therefore, the long-term effectiveness of the above regulation will be dependent on the unknown and unpredictable fishing pressure exerted.

Restrictions on angler effort may represent an important management option for maintaining the trout population. However, policies that seek to reduce fishing effort are often unacceptable and hence have rarely been implemented in recreational fisheries. In addition, reducing fishing effort will also mean less revenue from licence sales â€“ the only source of income. Therefore, before reducing fishing pressure managers need to have a clear understanding of the financial impact, particularly when angling participation is in decline and managers need to retain current angler participation as well as recruit new anglers.

If you are in the area on the 17th February this looks to be a very interesting meeting.

Public talk on Climate change: science, response and energy, James Renwick and others

Climate change, and the response is one of the big global and local problems facing the world today.  James Renwick will talk on the subject at Lakes and Waterways, Thursday 17th February at 5 pm, Acapulco Motel, 19 Rifle Range Rd.  James is a New Zealand weather and climate researcher.  He is professor of physical geography at Victoria University of Wellington, specialising in large-scale climate variations and has been a key New Zealand contributor to the IPCC and to the 2021 Climate Change Commission report.  In 2018 James was awarded the New Zealand Prime Minister’s Science Prize for Communication.  The talk will also include perspectives on New Zealandâ€™s current, and future, energy supply.  Seating is limited, due to current covid restrictions. Please register by Friday, 11 February 2022 with Jane Penton, secretary Lakes and Waterways: [email protected]