The 28 minute programme is well worth listening to. I have simply copied the advertising for the programme. To hear the broadcast Click here

The advertising for the programme is as follows.

Didymo began its invasion ofÂ  waterways in this country in 2004.

It’s aÂ  type of alga andÂ  has spread rapidly throughout the South Island.

All hope of eradication of the invasive organisim were abandoned several years ago.

But has it turned out to be the major problem once feared and why hasn’t it spread to the North Island?

The preventative Check Clean Dry programme is still being promoted, but is there any point?

Philippa Tolley has visited the Waitaki River area on the border between Otago and Canterbury, to find out more.

In summary the conclusions that I drew

A report from the Cawthron Instatitute examining chemical properties in water and Didymo as mentioned in the insight programme, was released today.

Some anglers have experienced success in the last week. I have seen a couple of fish caught. a 10lb Brown trout was caught. After I posted last weeks update we had another small flood of 56cms. This was followed by high winds and then a couple of beautiful days but today has seen high winds again. Despite all of this thre are more anglers trying their luck. I tried and had a couple of takes. It is still early days in the 2012 season.

Pools from the Blue to the Poutu

From the Blue Pool to the Poutu Pool are Boulder Pool, the Big Bend Pool, The Fan Pool, The Cliff Pool, Boulder Reach and the Poutu Pool. In between these named pools is sime very good fishing water.

The far bank at the tail of the Blue has traditionally held fish but the big boulders make wading dangerous. 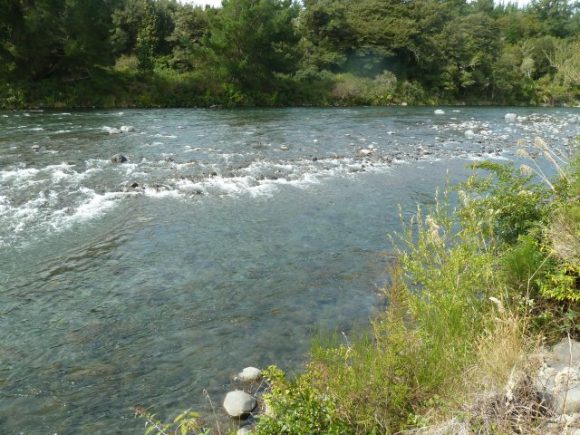 We named this pool alongside the left bank the Blue Duck Pool because the Blue Duck were always seen on the Bank. There was a small deep pool with good sized boulders against the left bank. The idea was to walk across the shallows at the top of the pool, walk to the tail of this small pool and nymp up. Trout caught here were energetic and difficult to land but it was good fishing. Today it lacks the depth of a good holding pool. The river has been crossed here to the right bank as access to the Boulder pool. In doing so you disturb a number of fish in your path. Best crossed in pairs.

The Boulder Pool has been a great pool for years. This morning it had three anglers in it. Fish are found at the top of the pool and in pocket water all through the stretch.

The above photo looks to the head of the Big Bend Pool. A strange name today but prior to the flood of 2004 it was the bend to the Breakaway pool which was eliminated by the flood that year. The Big Bend looks likely water and holds fish. Access is from a carpark on the road track to the Blue Pool. From the Big Bend access is possible to Boulder Reach. 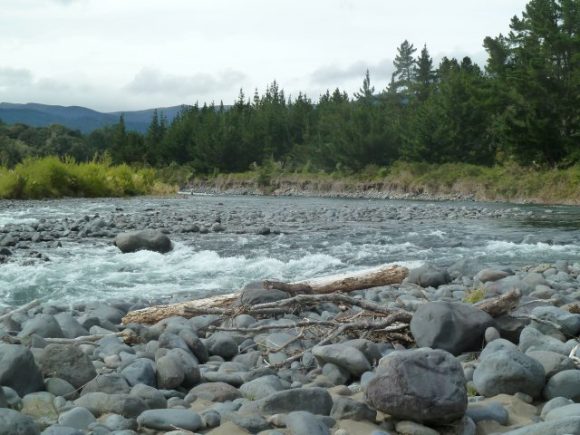 The next photo is towards the tail of the Big Bend pool. 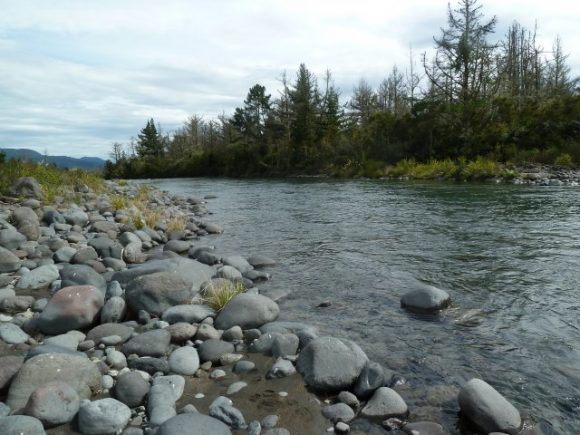 The Boulder ReachÂ  is getting shallower each year since it formed after the flood of 2004. It looks lovely nymphing water. The deeper water is against the right bank.

Access to Boulder Reach was blocked by strong winds in the weekend storm. Two old pines fell across the road blocking access but this was quickly cleared up.

The tracks in the area are in good condition. This track connects the Boulder Reach carpark to the Poutu Pool’ It is interesting that the track vegetation has been sprayed. Away from the track I enjoyed the fruit of the Blackberry.

The Poutu pool has always been a popular Pool. It is best fished from the Right bank.

From the Poutu Pool to Boulder Reach the braiding of the river has become more pronounce as can be seen in this photo.

The last of the photos shows where a huge limb came off a very old Pine tree on the path to the Big Bend pool.

The old pines around the car parks are a danger in strong winds as they shed limbs easily. This point has been made at meetings of the Forum (a meeting of Tongariro River stakeholders.)