BNZ Bank Manager. The family moved, 1925, to Days Bay in Wellington and lived for 4 years close to the ferry wharf and to Fraser’s General Store. Muriel Fraser later became a Turangi resident.(She was the mother of Heather Truebridge who became a neighbour of Jock in Tokaanu.) In 1928 the McNab family home was built in Ngaio where Jock had a pleasant childhood. He attended Muritai Primary and then Ngaio PrimarySchools followed by secondary schooling at Scots College, Wellington. The links continue. The Headmaster was Joseph Richard Sutcliffe, a cousin of Jock’s mother, and the father of Turangi resident, Judy Nelson. In 1937, his matriculation year, his parents asked what he wanted to do on leaving school. These were Depression years and jobs were not easy to get. He made three applications, received one response, was interviewed and was hired by the Union Steam Ship Company in a role described today as a shipping clerk. He hoped that he could finish his matriculation year but the Company said that he should start immediately on the Tuesday following Labour weekend. He loved the job.

December 7 1941 the Japanese made a devastating surprise attack on Pearl Harbour. Jock, a member of the Territorials, was called up for Army service with the 3rd Division and saw postings to the Solomon Islands, Norfolk Island and New Caledonia. When the 3rd division was withdrawn from the Pacific theatre he was sent to Italy.

On his return after the war he resumed work with the Union Steamship Company. The company was sold to P & O, then purchased by TNT  Australia in 1972 and then to Brierley Investments eventually folding after 150 years operation.

Jock started his trips to “the Mighty Tongariro” (he remembers the sound of the river on the approach to Turangi, the sound we hear today only when the river is in a significant flood) when invited by a Ngaio neighbour, Athol Kennedy (brother of Dr Ron Kennedy) to accompany him to the area. They had a small boat which they left in the Tokaanu stream and they fished the Delta. They stayed at either The Bridge Lodge or Taylor’s Lodge or the Tokaanu Hotel. Jock talked of Joe Frost (the first fishing tackle shop in the district), and remembers the women from Rarotonga who worked out the back tying trout flys.

Jock loved fishing the Delta. Until he gave up fishing due to the decline in eyesight the Delta had 4 mouths open with the main one having a couple of rips. It meant that he could fish in most winds with a degree of comfort.A Northerly meant the ‘Blind’ could be fished, a Southerly meant the ‘Main’ and in an Easterly you could fish the ‘First’ or the ‘Hook’. Today only the ‘Main’ remains, but there are two rips.

Jock recalls fishing the Delta with his nephew when the RNZAF Sunderland Flying Boat flew very low overhead and landed in Waihi Bay. They pulled in their lines and went to watch as the Sunderland made its way to the old Tok 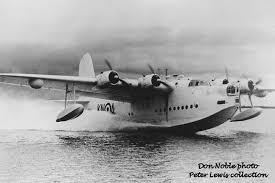 aanu wharf with the two engines nearest the wharf shut down. He was to learn that it was an exploratory visit in preparation for the visit of the Queen Mother in 1958. The visit did not include a fishing trip based at the Tokaanu Hotel, but a buoy was put down and used for some time by the Taupo float plane. Jock did not see the Sunderland depart.

His best fishing experience was at the mouth of the Omori steam where he and Athol between them landed 25 trout keeping 8 each (the limit at that time).

In the late 40’s access to the Omori Stream was available only by boat. Jock remembers the American forces having a Rest and Recuperation camp there and when they eventually left he acquired much of their camp equipment. The tents would be erected at Christmas and remained until Easter. He praised the fact that at times the camp was left unattended and not a thing was taken.

Jock formed a friendship with Fred Schroeder and totally enjoyed fishing with him. He bought a canning machine from Mary Williams and canned the best of the trout they caught. The main problem was acquiring the cans as the manufacturer had to be assured that they knew what they were doing and evaluated early efforts but it passed the test. Jock claims it was better than commercially canned Salmon.

In retirement Jock looked for a permanent base, purchased a property and built his house with the initial aim to have a place to store equipment instead of having to bring it up from Wellington on visits. He has lived in Tokaanu for the last 30 years.

Jock has observed the rise and fall of Lake Taupo over many years and kept a daily record of the Lake level. He is adamant that the level was raised intentionally – it was not a flood. The Advocates, through Dr Stuart Crosbie, made a case to Mighty River Power (now Mercury) who control the Lake level with an argument that they could generate the same amount of power with an adjusted operating system but this was not accepted  after lengthy consideration.

Jock has been at the forefront of a battle with the Lines Company over their pricing for delivery of electricity. It was galling that the district went from being a low cost electricity provider to one of the most expensive – that is, with King Country Energy and Genesis Energy both producing power in the area.

Jock has been a strong supporter of the Advocates. Asked why, he says that he is not an activist but believes strongly that the environment needs looking after. After the 1998 flood , the Advocates was formed in response to the inaction initially shown by authorities to clean up the river after the flood. This was the beginning of Jock’s long time support.

Jock has a croquet green on his front lawn, He loves the complexity of the game and enjoys the locals who meet weekly to play.

It is a credit that despite his loss of vision, due to Macular Degeneration, and attaining 100 years in age, that his brain is as strong as ever and that he can walk around without the aid of a walking stick. He says he misses cheques and the changes brought by new technology but does appreciate the talking books that are now available to him.

We sincerely thank Jock for his support and his active contribution.