I asked 4 of our committee (Carl Bergstrom, Gary Brown, Mike Forret, Richard Kemp), to write about their experience with this seasons fishing to date and to include a couple of photos. Their contributions are as follows. 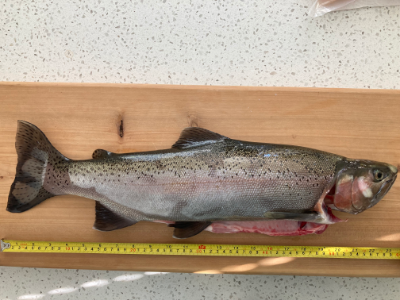 Just as I was thinking that the fresh runs were almost over for the Rainbow spawning season I landed a prime condition fish below the Island Pool. It took a flashback pheasant tail nymph in fairly coloured water after one of the few periods of heavy rain this season. I followed this up with a â€œsilver bulletâ€ in the Waiotaka River a couple of days afterwards. Its skin and flesh were the colour of salmon and it made superb sashimi / gravlax. If you want a complete change in style of fishing, give the Waiotaka a go. Access from Waiotaka Rd just past the prison is easy, and affords a good few hours of fishing as you work your way upstream. Leave your heavy Tongariro gear at home!

If you needed any more evidence as to how dry conditions were this autumn, take a look at the Waipa Trap data for June. In the previous three years there was an average of 209 fish trapped in June (70% of them brown, at the end of their spawning runs). This June there were only 24, which DOC attributes to the very low water in the upper tributaries. Overall we know that fish stocks remain very healthy, so presumably fish spawn lower down the river in these conditions. 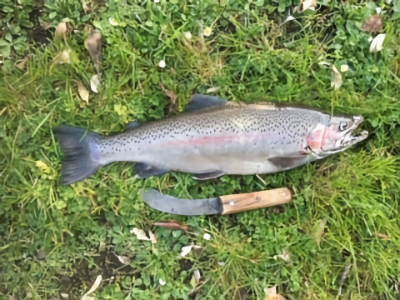 After attending the advocates meeting on Saturday 25 September, I attempted to fish the lower river on both the Saturday afternoon & Sunday morning but was prevented from doing so due to the Genesis recreational water release (which apparently was scheduled to occur on the Saturday morning). Whilst I knew the river would probably be unfishable on the Saturday I was not expecting the same situation on the Sunday – I guess the recreational release suits some river users (particularly the commercial river rafting companies) but I am sure there must have been many weekend anglers who like me were unable to enjoy our favourite sport due to it being unsafe to wade.
Our Advocates committee is aware there is a considerable infestation of gorse (which is currently in full flower) in the lower river area & our committee are currently negotiating with land leasees & owners to eradicate it to prevent further spreading.

Honor and I happened to be in Turangi in mid August on the eve of the country being locked in to Covid level four.  We had to decide within forty-eight hours whether we would stay in Turangi or return to Wellington for the lockdown period.

After some debate (about one minute) we decided to stay in Turangi.  What a great decision that was.

For the first few days we carried out some deferred maintenance in our house and tidied up the shrubs and trees in the garden.  We then heard that fishing was being allowed (after some timely intervention by the Act Party) so long as there was no wading and some other restrictions which I have forgotten.  I trimmed areas of  scrub overhanging a good stretch of water, so that we could fish from the bank in our gumboots without the need to wade in the river.  Then I saw that anglers were wading below the main road bridge.

We fished in our favourite stretches of the Tongariro (local of course!) and had some marvellous fishing – very few people about as only residents were able to fish because of travelling restrictions.  The fish were mainly of very good size and quality.  A couple of photos are attached by way of example.

If we have another level lockdown, hopefully we will spend the time at Turangi again. 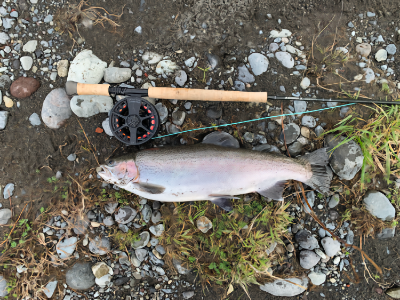 Normally, when I come to Turangi for a few day’s fishing and catch a few fish, the fish I catch are generally good average fish with one or two very good or excellent fish – let’s say 80% average and 20% very good or excellent. However, on my latest trip (last week of September), I would say these numbers were reversed with almost all the fish I caught being of very high quality/condition. 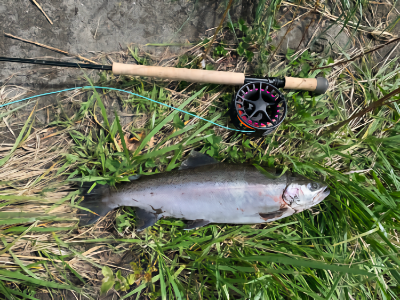 Over the days I fished, the river conditions varied from high and dirty, due to a ‘recreation’ release, to clear and more normal levels, and the weather also varied from windy and raining to sunny and calm. Eric and I fished a couple of times in the lower reaches of the river and I spent quite a lot of time fishing above and below the traffic bridge. Regardless of the weather, river conditions, or which part of the river, the fish I caught continued to be of high quality/condition.

These days I do Skagit style fishing, swinging a wet fly down and across the river. I enjoy this type of fishing and find I can cover large areas of the river and can fish from almost anywhere without worrying about space for a back cast. 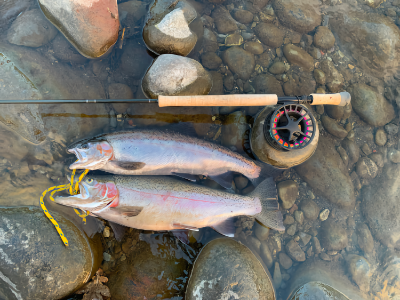 All the fish I caught during this trip were caught on a weighted, bead head or tungsten head, green, woolly bugger. I don’t think there is anything particularly special about a green woolly bugger. I think success is more about presenting the fly to the fish in an enticing way and a variety of flies will work fine. However, the woolly bugger seems to work  so I stick with it.

This last trip to Turangi has provided some very enjoyable fishing and some of the consistently best quality fish I have encountered.