In a previous blog I said that fishing the river would be yielding fresh run, good quality fish through to Christmas. There were still good fish in the river a week ago.  I fished the Delta on Monday with Gary and Paul and we each caught one fish. Paul caught the first and I thought it a bit lean. Gary the second and it looked great in size and shape and I caught the third which looked pretty lean. Mine was, I guessed, poor. Paul’s fish was the best by far certainly in colour. The flesh colour of Gary’s fish was not great. The photo is of a fish I caught 10 days ago. I apologise for the gruesomeness of the photo.

WRC Work on the Tongariro.

I have not observed any work happening.

Yesterday, December 5,  with Committee members Alasdair Keucke and Virginia Church, I attended the annual Genesis environment meeting. The meeting is always valuable and informative and an opportunity to discuss issues with a wider community group.

Craig Brown, station manager, spoke about the issues confronting Genesis in power generation. Earlier this year the South Island generators faced a dry winter resulting in low lake levels while Taupo was near full but this has now reversed and Taupo lake level is low  while the South Island lakes are high. There was a period of very high spot pricing suggesting that the ability for the nation’s power generators to cope with peak demand is at a maximum. When Lake Taupo is full and a high rainfall event is expected, the Western diversion which adds 20 cubic meteres per second (cms) can be closed off as can 65 cms from the Western diversion. This was referred to as ‘foreign water’ as it is not natural flow into Lake Taupo.  Craig was asked what plans are being made to cope with increased demand which will occur as a result of Electrical Vehicles (EV’s) and population increase. This was not adequately answered. Have we reached the limit of Hydro generation for the future?

Chris Ormandy, Environmental Manager,outlined the events they had managed during the year with only one flood in March that was a 1 in 5 year event with a flow of 800 to 900 cumecs. This raised the issue of sediment build up at the Delta and at the mouth of the Tokaanu Stream. It was agreed that when the level of Lake Taupo is high there is a back flow effect causing very wet conditions at Tokaanu.

The clearing of sediment from the Rangipo dam was questioned. Sediment clearance is normally around 5 years before the gates are opened to release the sediment. Clearance occurred early last year and aga in March of this year.  It is proposed that the gates will be opened again in 2019 for further clearance. Clearance involves a track nearest to the intake to the Rangipo Power station, not the full area behind the gates. It was said that despite the advice given to set the consent conditions that the operation be tweaked to allow the gates to remain open for longer than the consent conditions require to enable the river to clear the sediment right through to the lake which is not the case at present.

Cam reassured that monitoring of the Tongariro River showed a healthy river. The periphyton which covers the rocks is short and an excellent source of food for Whio and insect life which is food for trout making their way back to the lake. All this information is available on the Genesis web site.

The number of Black Swans in Tokaanu Bay was raised and the fact that they are now making their way up the river. They are a source of Lake pollution.  The swan population is stable. The swans arrived after Lagrosyphon arrived in the lake. This pest plant arrived in the country as an aquarium plant and was discarded by some one into the lake. Once established the swans found a plant they liked. To get rid of the swans get rid of Lagrosyphon.

Cam responded to my statement which I really appreciate. I have copied and included his response here.

The swans are a source of faecal coliforms, that is true, but the statement about them being a source of â€˜pollutionâ€™ is a little ambiguous.  Swans utilise a food resource (lake weed).  Lake weed grows because people allow nutrients to enter our lakes and estuaries.  Swans are a symptom of human effect, not a cause of lake pollution as such.  The Tauranga harbour is a classic example.  People think swans are causing the sea lettuce to grow in the harbour.  In fact, it is nutrient runoff from human activity that causes the sea lettuce, the swans are simply using a food resource created by humans in that system.  Tokaanu & Stump Bays (and many other sheltered shallow bays) on Lake Taupo are exactly the same. Swans are not the problem, they are a symptom.

Dr Jaques Boubee spoke on his specialist subject; tuna which translates as eels. The two species, longfin and shortfin eels, exist in the Wanganui river system to which Lake Otamangakau is part. There is confusing data at this time. The main species at the drums which keep eels out of Lake Rotoaira are short fin eels. The female is the larger (a fish over 750mm is a female). Tuna are a threatened species. At one time there were 4 million eels in NZ but today there are only 10,000. The request was to leave the eels alone and the plea was that those who clear the drums take only the injured for food.

DOC staff member Alfonso Siciliano spoke about the new fish counting machine (Vaki) that he has developed. It meant that data is collected 24/7 and is sufficiently sophisticated to measure the length of fish. With the two-way system fish can be counted going up or downstream. A video records the transit of the fish. Alfonso is looking to improve this apparatus. I was impressed by what has been developed.

Dr Michel Dedual spoke of the patchy quality of fish that have been seen this year. Some very good fish and some not so good. Michel spent time pushing the message that fish from Lake Taupo should not be a catch and release fishery, acknowledging the fact that there are too many fish in the system. Michel also spoke of a study on catch and release in Lake Otamangakau. The concern is the survival of trout that are able to swim away after release. They look good as they swim away but what is the true outcome of catch and release for the trout? The concern arises from complaints about the decline in the size of fish despite very high rates of catch and release. Interesting.

Lastly Malcolm Swanney of DOC spoke about the Whio recovery programme and the good results seen in the growth of the Whio population. He acknowledged the value of his Whio detecting dog that enabled staff to see almost 100% of the birds where in the past they were probably seeing 50% or  less. He emphasised the strong territorial nature of the birds and made a plea that they not be pushed up stream of their territory as the older birds in the next territory will kill them. Malcolm thanked Genesis for their significant financial contribution which has enabled survival of this bird.

For me it was a rewarding session and a good opportunity to retain contacts with Iwi and stakeholders.

I ask anglers their favourite ways of consuming Trout. Anglers from Europe say their favourite recipe is Blue Trout. It is on the menu at restaurants in Europe and is spoken about fondly. It is a boiled trout recipe. A simple search on Google reveals a number of recipes and I have simply copied the first that came up here. Note it is Michael Palin’s recipe and he pushes boundaries.

I was pleased to observe a pair of Whio at the Reed Pool a week ago. That is as far downstream that I have observed Whio. I had been alarmed a couple of days earlier at the sight of a stoat bouncing along in the same vicinity.

On behalf of the Advocates committee I wish you all a Merry Christmas and a Happy New Year. It has been a good year in the catchment and I hope for even better next year.

The picture will be my time with grandchildren this holiday season. 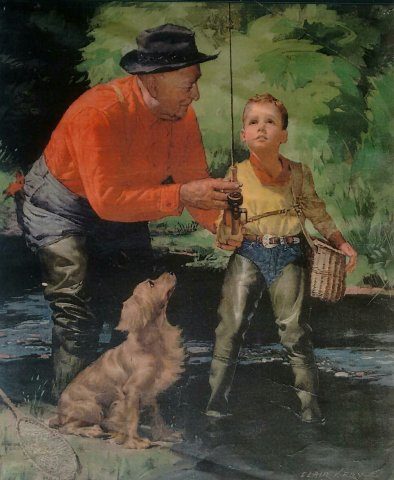