What a difference a day makes! Yesterday, 5th November, started with a gale and was freezing cold due to wind chill. That situation remained all day. It seemed to me to be a good day to go fishing, which I did in the early afternoon. I guessed correctly that no one else would be interested. Today was like a dream summer’s day. Calm, blue sky and warm.

It has been a good season and it is not over yet. As above, I wet fly fished (nearly always nowadays) in the strong westerly wind and caught two fish. The first I caught, pictured here, was a little over 3lbs but was in excellent condition. 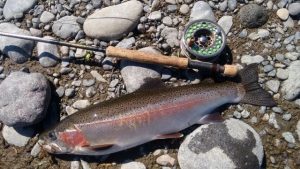 I don’t usually photograph fish I catch, but took these photos to illustrate how good the fish currently are.

On the previous Thursday, of the four I kept, two were of equally good colour and condition and fresh run. Two were good condition but losing colour.  One I returned because it was spent. Three others were good sport and survived the ordeal.

I fished at the end of October with Wilm Peters from Australia.

He was a Master nymph angler and while I caught two trout, wet lining, Wilm caught approximately 20-30 fish in 2 hours while in the same time I managed 2. I kept mine. Wilm returned his. What does a visitor do catching so many fish the day before he returns to Australia?

At Labour weekend I took Jack fishing. Jack is an 11 year old friend of my grandson I kitted him up in an old pair of waders (too big for him), rod, reel and nymphs and put him in amongst spawning fish. He hooked two and landed one. He is very keen to come again.

While Jack was fishing, a young local boy (teenager) fished his way downstream nymphing and crossing the river from side to side. He was well kitted out apart from no waders. When he arrived where Jack was fishing I asked him how many fish he had taken. 8 he replied. He offered Jack his sunglasses and continued to fish. He took 3 and kept only 1. Then he moved downstream (glasses returned) and landed another 10 by my count. He was a really nice young man and a very competent angler.

The river is full of fish. Up and down the river they are so eay to see in the shallows. Fish galore under the Flying Fox at the Major Jones and through to the Island Pool. The same story further up river. Looks like river fishing will continue through to Christmas. This is so different to the 1970’s. Then fishing started at Easter and finished with the end of school holidays in August. Now there are good fish in the river throughout the year but greater numbers now.

We were notified on Friday that there would be hearing of submissions on November 8th. at Parliament in Wellington.  Tim Castle, who will present our submission to the select committee,  is not available on the 8th November. The Committee Secretariat will allot another opportunity within the next 2 weeks. I will email our members of the new date. Interested members who are able to attend would be welcome. The first submissions will be heard on the 8th November and I would think there will be some reporting on this Bill.

The 5 yearly review of consents has passed. The review is not to relitigate the consents, it is simply a tweaking of the consents. Stuart Crosbie, on our behalf, put an excellent paper together (published in our annual report) in which an alternative management regime of water levels was offered, but after consideration it was not accepted. We had no  better argument to present this time and did not contest the consents.

I wrote earlier of the Work programme (WRC document is on our website in Library, Key documents). I spoke today with James Linehan who advised that there is still conversation with Ngati Turangitukua and that work is scheduled to start shortly.

Proposed works scheduled for the upcoming season primarily consist of gravel island, riparian margin and flood scheme asset vegetation control, along with gravel management. These are considered the most appropriate strategies to maintain the design standards of the Tongariro River flood protection scheme. Other works may include routine maintenance and ecological restoration such as appropriate revegetation and stopbank top-ups (generally permitted activities).

The allowed time for this work is November to May.

Unfortunately I was unable to attend this meeting as the Taupo Fishing Advisory Committee (TFAC) meeting was scheduled for the same day and time. Jane Penton, LWAG secretary, reported in the Taupo Times that 160 people attended which is a good indication of interest in Taupo waters. I will be able to comment further when I receive the minutes of the meeting and Jane has offered photos and diagrams used by Mike Joy in his address.

The TFAC meeting was to consider their submission on the Conservation Amendment Bill. 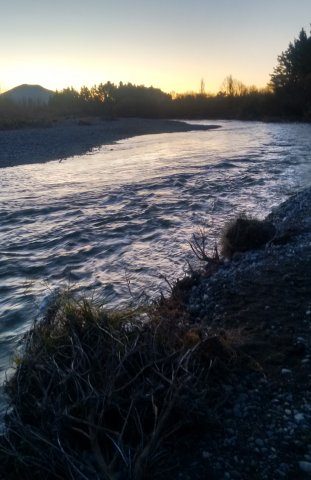