The positive from today’s drenching rain, a flooded river, a cold spell is that Spring is close at hand. The Daphne and Witch-hazel are flowering and the trees are swelling their buds ready to burst into leaf..

The river has fished well and I have enjoyed my fishing experience. I am very happy with the quality and condition of the fish I have caught. 6 fish per day is more than my wife and I can cope with and I give most away. I have taken to filleting the fish and removing all bones of fish I give away. In so doing I came across Shag Worm. If the rib bones were still present I would not have seen the worm and it may have been that eating half a worm is worse than a whole worm.

I filleted and boned one side and noticed nothing. On the other I exposed a Shag Worm. The two photos show a worm of approx 2 cms, slightly thicker than cotton thread.

This caused me to look more closely at the first fillet and I noticed this small spot, nicked it and extracted a tightly coiled worm which has unravelled for this photo. 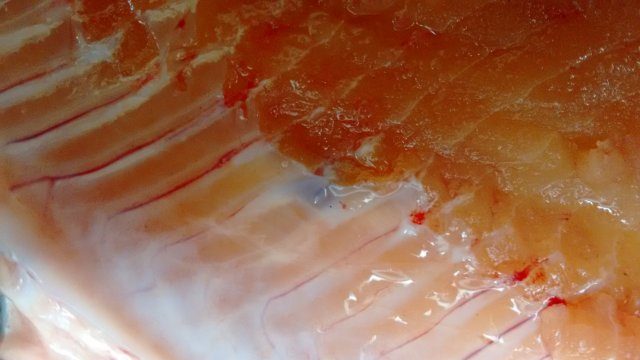 I have seen cysts on the outside skin of a trout when the nematode is more mature.

I looked on line for information and saw that most local blogs were reporting on the incidence of Shag Worm. I felt compelled to write as what I read does not tell what to look for. at least in the early phase of the worm inhabiting the trout. The technical name is eustronglides.sp. and is best for a Google search. From what I could see there is no danger to humans unless you eat raw trout in which case it “can produce gastric and internal perforation.”

This host trout that I caught was 3.25 lbs, orange fleshed and looked in excellent condition. Dave Conley DOC Fishery Manager, told me that the worm is more likely in recovering fish feeding in the shallow lake edges but this was not the case with this trout.

Dave sent me the article on Shags in Target Taupo #18 which is now in the Library, Key Documents, on this website.

There is nothing new about Shag Worm in Taupo. Shag Worm and Shags are indigenous, but having looked at other blogs I concluded that it has been a good year for this zoonotic parasite.

We had the pleasure to have Professor Paul Williams (Aucklnd University) speak to the committee about the the power of nature and the efforts of man to provide protection from the forces of nature. He introduced his 30 minute session with the origin of New Zealand breaking away from Zealandia (when NZ and Australia were one) and has floated on the mantle where it is today. The mantle is at all times moving. This gives rise to areas of uplift and areas of sinking. The Horomatangi Reef is rising,Whangamata Bay (Kinloch) and Waihi Bay are sinking. Lake Taupo is in a caldera. The eruption of Taupo 2000 years ago saw the huge crater fill with water and the sides collapse over the years since. The lake over time was some 60 meters higher than it is today until it overflowed and cut its way to the sea as the Waikato River before settling at a level some 4 inches below the current lake level. The control gates meant that the lake level was marginally higher but for longer periods than normal. Another key issue is that of climate change. We are seeing greater extremes with the weather.

WRC are called upon to provide protection for residents in risk areas. WRC puts aside $178 million dollars for protection (stop banks, problems with the foreshore, coastal erosion, stabilising hillsides and other) for the whole of its region. Professor Williams noted that no money was set aside to allow residents in risk areas to make a satisfactory exit. If that occurred risk land would pass to public land. There is much land in NZ that is at risk. Spend money and provide protection but nature will breach the protection. Stop banks are good protection but if the water gets behind  a sound stopbank then that water is trapped there as was the case in Wanganui and recently on the Taieri plain. So protection gives a sense of security but in extra severe conditions when protection is breached then the effort is lost.

From the presentation I consider the situation on the Tongariro River which threatens to break out at the Downs Pool into Deep Creek is an example of cost versus benefit. The river will always have an outlet to the lake. Fish will find their way up the river and anglers will have the fishing opportunities on the river which they enjoy today. Delta anglers will be affected if the current outlet changes significantly. There were two Pa sites on the lower river abandoned a century ago due to rising water table. The question I have is should I support the spending of  up to $15million to keep the river in the course it has today when in the future it will probably be breached,? Or should I ask WRC to set aside protection money to allow the current owners a satisfactory exit from that land?

The Downs Pool breakout is one of 3 possible sites where the river has flowed before. A second area is in the area of the Reed Pool and the river course is still visible when it flowed from the Reed Pool to join with the Tokaanu Stream.

The third possible breakout area which happens when the river is in a flood of more than 1000 cumecs is in the area just West of Turangi airfield and flows into Stump Bay. So spending money to stop a breakout in one location is not a safeguard to another area of breakout.

I don’t see anglers being prepared to pay for protection. It will be ratepayers who pay should a protection scheme be put in place. I don’t see that protection spent in the lower river is cost effective.

The more I think about the assets of the area I believe the greatest threat is to Turangi’s sewage installation at the end of Awamate Road and I think that the discussion WRC has to have is more complex than envisaged.