It is Autumn, not winter but there have been signs of the winter to come with intrusions of the summer that is passing. We have had some lovely days, cool (not frosty) mornings followed by jersey freeÂ days. But there has been rain. We have had two small floods in the past monthÂ as shown in the graph fromÂ Genesis Energy.

The Department of Conservation has finally found a temporary office (12 months) while they seek a permanent presence in Turangi. There current office is above the WINZ office in Turangi Town Centre. Access is by way of stairs opposite Sporting Life.

I bought a smart phone but you need to be smart to operate it. It takes good photos but the process of transferring the photos to the website involves more steps than the process of using the camera. I will learn and use in my next blog.

Anglers are fishing within the town boundaries with small numbers elsewhere. Anglers are enjoying good fishing. Fish in the main are in good condition, and most that I talk to say that the condition is great with good flesh colour. Some 6lb fish, including rainbows, being caught.

We have worked on wilding pines but the willows are now a significant problem on the Tongariro River. The stakeholders recognise the willow problem.

Young Wilding pines are prolific in parts and we hope to find funds to deal with them.

I believeÂ our responsibility re the willows is to bringÂ the issue to the stakeholders or them to deal with. It would be a pity if the same action below the SH1 bridge was to be applied up river. I know that Todd Baldwin of Waikato Regional Council is keen to deal with the willows upstream.

Under normal flow conditions floods will clear the seedlings of bot pine and willow Â but the lack of significant flood (+600 cumecs) has allowed willows and wilding pines to establish deep roots which can withstand floods. I recall year old seedling wilding pines 3 years ago on the left bank of Boulder Reach being eliminated by a large flood. Floods are important in maintaing clean gravel beaches.

One of the great sights on the river is that of the Whio. 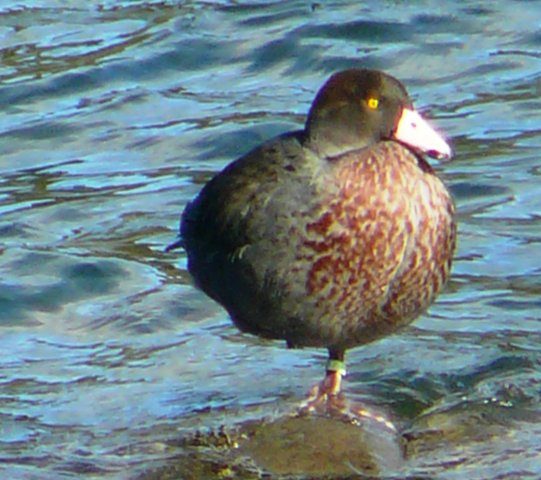 OK they look like a duck but when you consider how specialÂ they are, then it is worth all users of the river to look after them. There have been a pair in residence in the Breakfast Pool and I was pointing this out to two Australians. They said that their guide the day before had shown them 16 in another location on the river. I thought this a bit exagerated until last week, when talking with Mike Nicholson of DOC, at the Major Jones Pool we watched 8 young whio cavorting in the Pool. Mike explained that the young males, when starting life away from the nest, seek the company of other young males thus the sighting in my case of 8 Whio and the Australians 16 Whio. Older, they pair up and become very territorial and chase intruders away. Their fearless attitude towards humans is to their detriment as each year there are reports of Whio killed by dogs. Locals living beside the river regard the Whio as part of the environment and do their best to protect the birds and inform visitors of them. I thought it interesting that a bus load of visitors came to view the Whio at the Major Jones last week.

Neville Young and I met with Dave Lumley of DOC last week. Dave informed us that the section of the Tongariro River Trail through the Waikari Reserve (Hydro Pool to the road leading to the Stag Pool) will be improved in the next couple of months. The Trail will be brought up to the same standard as the remainder of the Trail.

Hopefully there will be no more prison escapes and prisoners will be able to work in the community on projects of value to the community.

We thank all of our members for their support.

If you have forgotten payment of your subscription we are pleased to accept your payment and hope that you would like to serve on the committee.