The Bridge Pool continues to be one of the most popular and productive pools on the river. There were 5 anglers nymphing the pool yesterday around 2 pm when I crossed the bridge. It’s a great vantage point for spectators who can, with polaroid glasses, see where the fish are and watch trout take the nymph. In this photo the angler on the beach has just landed a trout.

The angler at the head of the pool was hooking fish on a regular basis but failing to land fish – at least while I was watching.

This morning I wandered upstream and the next photo is looking upstream over Cattle Rustlers where, from my viewpoint, I could see a lot of fish past Barlow’s pool and through to the lower Birches. There were fish here but no anglers. 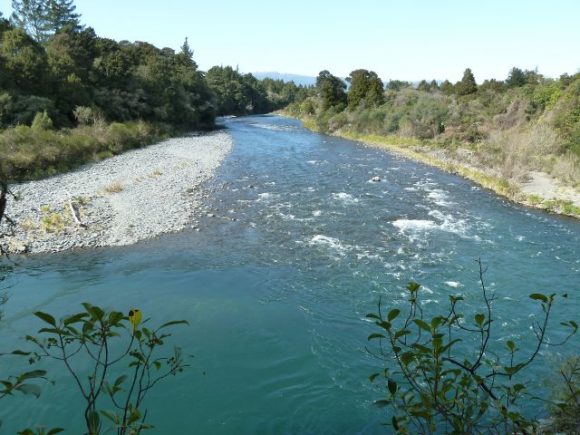 It is a beautiful day today – warm, calm, clear. Last week, and at times this week, the equin0xial gales have been present and casting is hard work, almost impossible for nymphing. It is Spring.

The fish I have seen this week are good size and most anglers seem to have a fish in their basket.

It was a ‘recreational release’ of water in the Tongariro last weekend and there is an interesting spike showing when it came through.

I saw Dave Lumley, Area Manager the next day. The Department had circulated the following Press release to the media but to my knowledge it was not picked up. The release states:

The Department of Conservation is to set up new regional service centres in its Hamilton, Wellington and Christchurch offices as it moves to re-organise its systems for supporting conservation staff in the field.

As a result a number of science and technical jobs have been cut from the Department of Conservation’s Whanganui, Taranaki and Turangi offices, and some new support roles will be consolidated in a new conservancy office in Taupo.Â  The changes do not affect ranger positions in the Departmentâ€™s area offices, or the location of the area offices.

Tongariro Whanganui Taranaki conservator Damian Coutts says the decision to move the conservancy office to Taupo was â€œvery tough to make, and a traumatic one for many of the affected staff, but was necessary in order to position the departmentâ€™s staff closer to its key partners and stakeholders in the region.â€

Of the 19-20 jobs likely to be lost from the local communities of New Plymouth, Whanganui and Turangi, Mr Coutts says 9 positions would remain in the new conservancy office, and these positions will be based in Taupo from July of next year. He says â€œIt is important to understand that many of the positions disestablished as a result of the review announced yesterday have been relocated rather than disestablished altogether. This means staff will have the option to relocate to a service centre, or regain employment with the department in one of our area offices. However it still does represent a significant impact on our staff, and on the local economies of the affected towns, and that has not made the final decision any easier to make.â€

Relocations are due to the establishment as part of the wider departmental review of three service centres in Hamilton, Wellington and Christchurch, where service jobs will be created. â€œBy moving the support staff from a regional base into professional groupings, the department would be able to provide more cost-effective systems and would gain a stronger national focus to its workâ€ says Mr Coutts.

These service jobs include roles in legal, planning, science, technical and communication positions, but not rangers. â€œThe department is committed to maintaining services on the ground, and this review has been focussed on finding more cost effective ways to organise DOCâ€™s systems for supporting the work of staff out in the fieldâ€, Mr Coutts says.

â€œWe want to maintain our conservation field work and we are keeping all our ranger positions – but we are making changes to the roles in our regional and national offices which support their work. In the past weâ€™ve grouped our support systems by region, with additional back-up from our National Office in Wellington. This has led to some duplication and a regional rather than national focus for our work.â€

Mr Coutts say â€œall staff with service positions would need to reapply for their jobs within the region or those available in other regions or the service centres. We canâ€™t say exactly how many people will lose their jobs because we are still working through the options, such as redeployment, with our staff. We expect to finalise the situation over the next six months.â€

I have been assured

We have worked to form a good working relationship with the Department of Conservation and would be upset to lose the staff from here.

The lookout above the main road bridge has seen the beginning of planting with a good turn out from the local community and Te Kura Hirangi who are the subject of this photo. It was fine but the equinoxial gales were in full force making it difficult to stand at the top of the hill.

Traps. The Blue Duck Trust has many traps on both sides of the river. I think they are doing excellent work eliminating pests. The traps I have looked at seem to be catching rats.

Last week I fished into the evening at the top of the Reed Pool and watched a novel method of pest control. There were two anglers on the opposite side of the river to me. The one immediaely below me started thrashing the water with his rod and then made a grab at the water catching a rat by the tail which was swimming across the river. He then calmly waded out to the bank where he and his colleague considered how they would dispatch the vermin. An attempt at drowning didn’t seem to work but I feel assured that the rat was dispatched.