The state of the river from SH1 bridge to the Delta mouth.

found the river to be in good condition for most of this length. 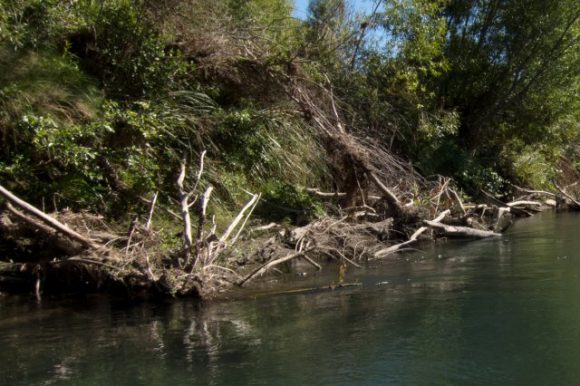 and there is the the area from the bifurcation to the First mouth through to the Main mouth that requires work. Lastly, there is the Main mouth itself which is a sand bar of approximately 100 meters that if removed would help the river clear itself. Arthur Grace tells me that there will be logs stuck in there causing the build up and that it is necessary the plug be pulled. We agree.

There is a lot of silt and sand in the river, both upper and lower river areas. Fish don’t lie in these areas. They like gravels. Where there is a gravel bottom and some cover there will be fish.

The only experience that I can report on since last week is my own. In a word the fishing has been hard. I can confirm that there are fish in the river and that they are able to be caught. On SundayÂ  I thought that I would report that the runs have started. I hooked 3 fish in 30 minutes landing two. Monday I didn’t fish. Tuesday was unproductive nor was Wednesday made worse by a howling gale. Thursday and Mike Forret was to go home tomorrow so I was prepared to spend longer than two hours fishing. I tried the Boulder Reach and the Big Bend during the morning without sighting or feeling a fish. Late in the afternoon we tried again and I was able to land three fish in 15 minutes. The fish were in fast flowing water which was obviously clear of sand and silt. Two fish were small while the third was 3 1/2 lb, nice condition and red fleshed.

The flood in the weekend obviously brought fish into the river but they are not there in numbers at this time. The season is getting very late. It is as it was in February 1990 so is very late.

Fishing pressure has been light. The result has been hard on Turangi and particularly the Turangi business community.

It is a simple message. It seems however that it is a message to which lip service is paid rather than action taken by many. But it is not just Didymo. There are other possible threats that could have a disastrous impact. We can only persevere in pushing awareness of the problem and stress the advised remedy of CHECK, CLEAN, DRY.