I recommend a visit to the National Trout Centre facilities and in particular The Genesis Energy Freshwater Aquarium. The Hatchery complex is in a beautiful setting with its indigenous vegetation, the beauty of the river and the well developed museum complex. The aquarium adds to the interest with an excellent display of indigenous and pest fish. Trout are not part of the aquarium but that does not detract from the displays as the viewing chamber within the complex on the Waihukahuka stream is better than a small aquarium display could show.

I love fishing the Tongariro and Lake Taupo and have been aware of the indigenous fish and pest fish but most of them I have not seen before. Therefore the Aquarium has increased my knowledge of the indigenous species. R.M. McDowall wrote an excellent little book, “Freshwater FishesÂ  of New Zealand”,Â  but seeing the live fish is educational.Â  It’s quite an impressive collection of fish. In the Introduction to his book,Â  Bob wrote:

“Although our country is very well endowed with large quantities of cool, clear water of the best quality, a casual glance at most rivers, lakes and streams does not give the impression that they are full of fish life. By the standards of many countries they aren’t. Although most people will talk familiarly of trout and bullies (usually calling them cockabullies), there are all too few who have much idea of the less common species that can be found in our waters.”

Image of Catfish from Tokaanu Wharf

The Aquarium does not display all freshwater species but those they do are excellent. Bob wrote “There are over 21 species introduced and established here, and these, with 36 native species and 7 marine species commonly found in our fresh waters, make a total of 64 species found in our waters.”

There is a $10 entry cost but the display is well worth the cost.

My quote from Bob McDowall needs to be considered now with the release of the National Policy Statement (NPS) Freshwater on the 9th May, 2011 by the Ministers of Environment,Â  Hon Nick Smith and Agricuture,Â  Hon David Carter. http://www.mfe.govt.nz/rma/central/nps/freshwater-management-background.htmlÂ  The criticism of the NPS is that land intensification can proceed without a resource consent. Why is this an issue? It ignores all the work done by a Board of enquiry and the Land and Water Forum and, sadly, a bad day for the 58 stakeholders of the Land and Water Forum (http://www.landandwater.org.nz/) who reached a consensus just as we have a consensus for an Integrated Catchment Management Plan for the Tongariro River. It would seem that the farming community has censored the Land and Water Forum document,

Where does the AFTR fit in? The key section of the Land and Water forum document was that planning and use should be based on an Integrated Catchment Management approach from the mountains to the sea, and it continues to be galling that the Waikato Regional Council, often feted for its enlightened management,Â  continues to fail to meet its obligations.

In the gravel extraction decision (on this website under Archives, Key documents) the commissioners Dr Jeff Jones and Dayle Fenton wrote:

“We note that the Plan required by condition 22 and the ICMP sought by submitters,
differs by only the descriptor â€œIntegratedâ€. The extent to which the WRC can
â€œintegrateâ€ is well set out in Sec 30 of the RMA. It is therefore disappointing that
WRC appears to be unwilling to accept its statutory leadership role in this matter as
noted by both the applicant and in the above quoted portions of the Preface to the
adopted Tongariro River Catchment Management Plan which condition 22 of
Resource Consent 110223 initiated.” 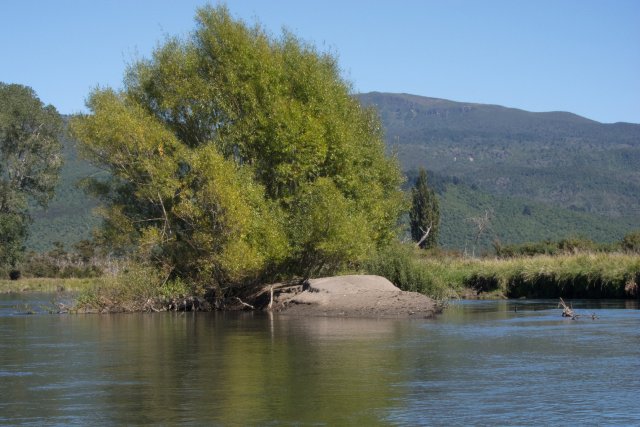 A willow growing in the lower river that should be removed

“I have just spent a very pleasant week at Turangi although the fishing was rather disappointing, not so much in the number of fish caught, but more in relation to size.

I did not fish before 9am nor after 5pm so that may have had a bearing on the result.

While most of the fish were in good condition, they were generally quite small except for a couple caught in the Tauranga-Taupo which were more like the fish which we used to catch 5-6 years ago.

Upon speaking to a number of people on all 3 rivers, the impression was that very few fish were being caught and those that were, were small.”