The AGM attracted a very small number of members. It was a dismal day, cold and wet but was a very pleasant venue.

The election of committee saw the committee re-elected.

Last Monday 29th May,, was the working bee for the second stage of planting preparation on the left bank of the Hydro Pool. A good team of 20 at 9.00am and 30 before 10.00am did a great job in accessing the willows and poisoning them. We now wait for spring and the blackberry to regrow at which point it can be poisoned. When it has died new planting can occur. Shirley Potter of Project Tongariro did an excellent job in allocating the work and directing the operation.

Many appreciate the removal of the vegetation but river banks need vegetation to stabilise the land . Some argue that blackberry does that very well. The reality is that environmentally the relationship between native birds and native vegetation creates the unique New Zealand environment and blackberry is not part of that system..

This land looks ready for planting but the blackberry does need to be dealt with.

Local History on the move.

“What later became known as Taylor’s Lodge but was at first, called Hatch’s Camp. was built in the late 1920’s and became the site of the first Turangi Post Office, opened in 1931. Until this time the area had been called Taupahi but a meeting of the Elders from each sub tribe, called by the secretary of the Tuwharetoa Trust Board, Puataata Alfred Grace, decided to name the post office after the chief, Turangitukua. .. When the Postmaster at Tokaanu, W.J.Taylor, resigned to take over Hatch’s Camp, his wife became Turangi’s first Postmistress.”

Taylor’s Lodge had a large dining room and  in the grounds a number of huts which served as accommodation for visiting anglers. The site is now being cleared and the 2 acre bloc has been surveyed into 9 sections. The building on the road frontage will remain. 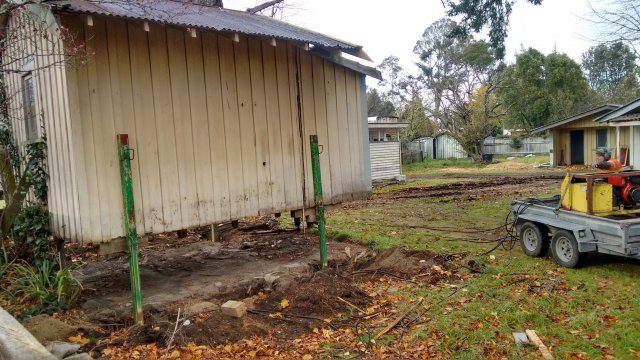 This photo is of one of the accommodation units prepared for removal.

Another unit being moved.

On Thursday I wandered down to the Hydro Pool to get a photo of the work that happened on Monday. I appeared at the right time and witnessed Wanganui angler, Antony Gibbons hook and land a 7.5lb brown trout.

I am often amused by anglers ideas as to the weight of fish caught. In this case Antony was accurate as his net had scales to weigh the fish. 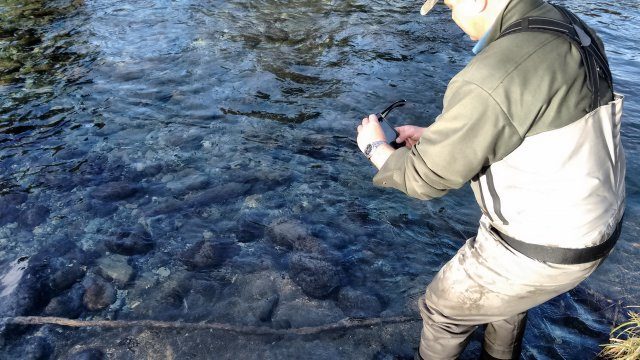 It is a trick I would have liked to have known in the past. In both the Hydro and Reed pools I have watched fish in a line using my legs to benefit from the less powerful flow but my attempts to photograph this phenomena did not work for me. I told Henry Heron of this and with his underwater camera he managed  good photographs.

Queen’s birthday weekend was busy but my walk from Taupahi Reserve to te Hydro at 11.00am saw only one angler.

Weatherwise, today was a beautiful day.