At the time of writing last week (Advocate 4/16) the work at the Bain Pool and car park had not been finished.

I returned this morning to view the work which the following photos show. From my view point I think Todd has done an excellent job and I have told him so.

The road from Graces Road to the Bain carpark is in better shape than it has been for some years. 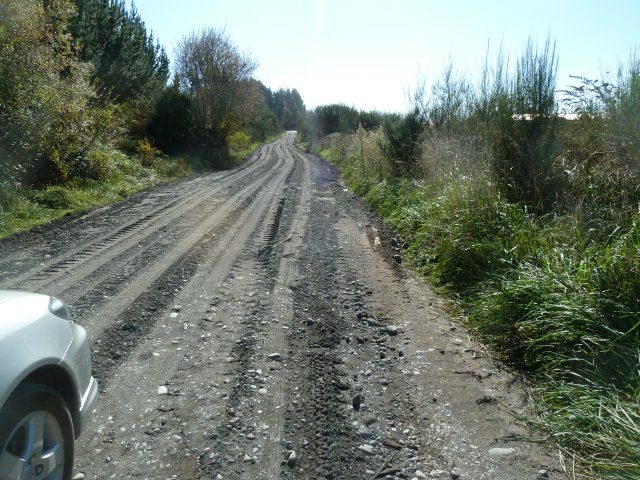 Access from the Bain carpark downstream for longer than 80 years has been for foot access for those holding a current fishing license. Vehicle aAccess beyond the carpark is blocked. Foot access remains.

The entry into the Bain Pool has been widened to allow a better flow. 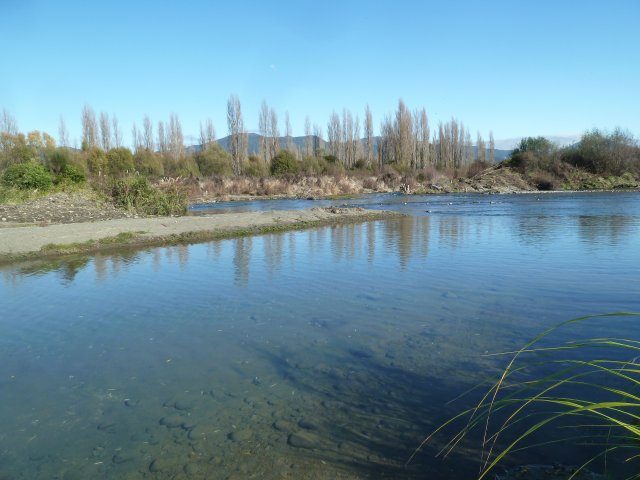 And there is an improved flow. The exit channel is rapidly working its way upstream likely to recreate the pool that many found succes in.

The intention was to allow the river to move in one of its old channels into the Bain. Hopefully this will happen with the next flood.

I couldn’t resist the last two photos in which someone has had fun creating a stone bridge and a weir.

TFAC argued strongly for a better way way of changing the regulations and it has happened.

This article appeared in the Taupo Times and in the Taupo Turangi Weekender, Â  Minister of Conservation the Hon Maggie Barry announcing the change. This was a key point from anglers in the Fishery Management Review a couple of years ago. It is the second significant change, the first being the introduction of electronic licenses. 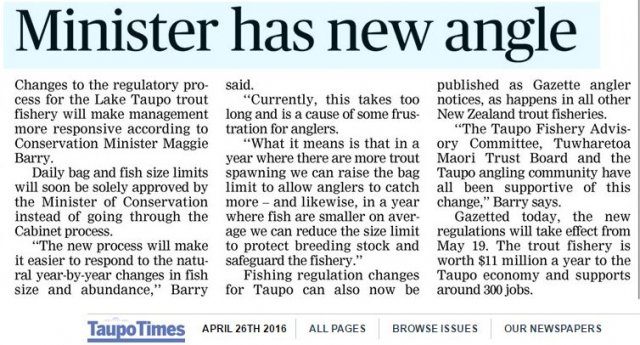 I wonder how long it will take for a National Fishing License to eventuate.

John Toogood in his role as Treasurer is keen to see a doubling of membership as is the committee. John asked me to include the following:

Many thanks to all who have paid 2016 subscriptions.

We do need to keep developing our membership base,

a) to enhance our stakeholder standing,

c) to maintain our financial stability.

One of the most effective ways to gain NEW MEMBERS is by introduction or referral by existing members. If each one of us introduced one new member in a 12 month period we would have doubled our membership for that year.

This would be an amazing result and perfectly achievable. Remember that all you need to do is tell a friend who fishes the Tongariro, or an aquaintance or someone you meet on the river about what we do. Point him or her to the website and itâ€™s easy from there.

We are a group recognised by stakeholders who do things other than talk. Your input is valuable to us.