Friday 19th August was very cold. The Desert Road was closed in the morning and the road off the Desert Road down to the Rangipo Dam was treacherous. The field trip to the Dam and Underground Power Station was called off and will br rescheduled for later in the year. Instead we had a lengthy discussion with Bonny Lawrence, Genesis EnvironmentalÂ  Manager,Â  Neil Jelley, Genesis chief Hydrologist and Charlotte Fletcher. 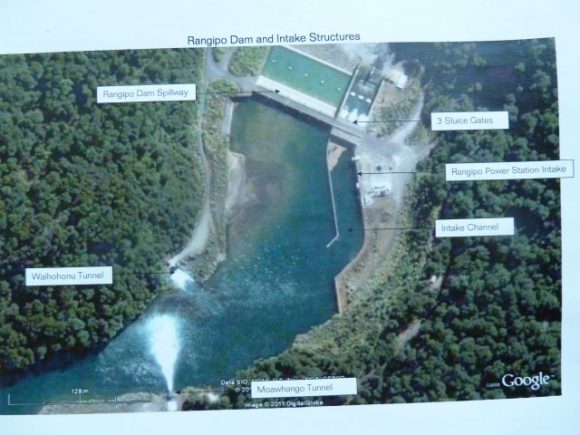 That Genesis comply with all their consent conditions is fully accepted.Â  The issue remains that theriver must carry all sediment to the lake. There will be deposition along the way and we understand that the river from State Highway 1 bridge to the lake is a delta. A delta is youthful, growing, changing, developing. A delta naturally builds up with sediment over time as they are the low energy, deposition zone for sediment.Â  The problem is that the river post Power scheme has only half the volume (outside of floods which have the natural flow of the river) and even less energy to move the sediments through the river. We are told that the sediment moves in pulses (flood events) but we observe that the smallest sediments are always on the move.Â  A result is that the delta mouth is clogged as these fine sediments build up at the mouth and create a problem back upstream as they settle.

This year we noticed a tremendous build up of sediments throughout the river. We were aware that the control gates on the Rangipo Dam had been opened in May and asked if this was the cause of the problem.

Genesis have considered the source of the problem as two fold. The first is that there was a particularly heavy rainfall event on January 17th this year on the eastern side of Mt Ruapehu (the very dry Rangipo Desert) with its unstable surface soil. From this event Genesis Energy had considerable damage to their structures on the Wahianoa aqueduct, something that has never happened before in the life of the Tongariro Power Scheme and think that this has put a huge amount of sediment into the upper river. Genesis Energy believe that this flood event resulted in a higher than normal sediment input which may explain why there has been a noticeable increase of sediment in the river compared to recent years.

The second source is catchment wide and is natural.

The area to catch the sediment at the Rangipo Dam is small and does not have great capacity for enormous deposition of material. The consent conditions require flushing to occur on a rising flood of more than 60 cumecsÂ cumecs which is predicted to rise to more than 100 cumecs for more than three hours, as measured at the Waipakihi monitoring station.

The resource consent requires Genesis to monitor only around their structures.

We have asked that they look downstream at the delta to observe what is happening. As a good neighbour we believe that they will.

Sediment was always seen as a problem in the design of the scheme and has been the source of numerous studies.

We have agreed to meet again in 6 months to discuss further.

On MondayI asked Lawrie Donald for a report on what is happening with regard to gravel extraction.

The Environment court has given a decision on the applicationÂ  by the Regional Council that there are no outstanding objections to the application. Â A Resource Consent to manage the river for the flood control scheme is now in place and River and Catchment Services of the Waikato Regional Council Â have been advised that they can now proceed with the operational side of managing the river floodway in a manner that complies with the conditions of consent.

Those who have ventured down the river below the Swirl Pool will have seen the clearance of willows along the flood plain. This work was carried out as a permitted activity but in future this work can be more extensive with the newly acquired consent.

The piles of willow will be burnt in the next month to avoid the â€˜fire seasonâ€™. That is before the 1 October.

The removal of the willows from the flood plain will have increased the size of the floodway and survey and assessment with the flood model will determine further works. Decisions on how to manage the floodway in detail for the future will be determined in discussion with the owners of the land, interested parties and the â€˜roughnessâ€™ requirement for the floodway to pass flood flows.

Further works anticipated are to be gravel removal both for channel management to reduce erosion and for floodway capacity reasons. These works will be discussed with the owners of the land, Tuwharetoa. These discussions will be specifically with Turangitukua. To date these discussions have been very positive.

It is the start of spring. The High Presure system over the country has brought beautiful days to Turangi. The Pine forests are aware of the change and the beginning of the pollen season has commenced. There is a film of yellow that is settling on surfaces and puddles. It will get worse over the next couple of weeks.

There are a lot more anglers around and I understand that more fish are being caught throughout the river. Stuart Crosbie

(Advocates President) and I fished in very cold weather last Friday evening and Stuart was successful. That made his rushed trip to Turangi rewarding.

This fish caught this afternoon, is better than we have experienced over the last couple of years but not as good as most remember from 5 or more years ago. In fact, even then the average size of trout was 3lb or 1.35kg. On that basis this fish was better than average even then. Today there were plenty of bites which was good.

Thanks to those who have sent feed back to these updates. Your comments are welcome.

Advocates For the Tongariro River